What if you were put into a future world? A world where there are 12 Districts and one Capital. Each district has it own job for the Capital. And each year every district must send 1 girl and 1 boy between the ages of 12 and 18, to fight to the death in the Hunger Games.  No rules but there can only be one survivor. Worse than that everyone is forced to watch them fight. Katniss Everdeen is 16-years old when she volunteers for her 12-year old sister Primrose at the reaping to go into the Hunger Games. Katniss must leave all her loved ones behind and possibly never see them again. She is put into the arena with 23 other kids one of which is from her district. How will Katniss get through these inhumane games? Find out in The Hunger Games the first book in The Hunger Games trilogy, by Suzann Collins. 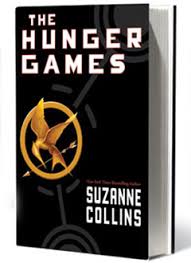 I read the whole Hunger Games series this summer.  And LOVED them. The first was by far my favorite. I read it in 24-hours and was having a nervous break down until I got the next book. Every chapter leaves you wanting more and every sentence is thrilling. There is action, adventure, romance and even a little bit of comedy.  The Hunger Games is not meant for young children.  I would say anyone under the age of ten should not read it, and even after that it depends on the kid’s maturity level. It is violent. But if you can get past the violence, Suzann Collins is an amazing writer. You can so easily relate to the character, if not Katniss (the main character) then you re bound to be able to relate to a different character. Each character is unique and complex. Some people say, “The Hunger Games is just about kids killing kids” but it’s NOT! This fan-tab-u-luos series is about Katniss’s inner battle with the Capital’s ways and how far she will go to win the games. If you are looking for a can’t-put-down book to read, I highly suggest the Hunger Games by Suzann Collins. I would give it a 9.5 out of 10

ALWAYS READ THE BOOK BEFORE SEEING THE MOVIE! The Hunger Games movie series first installment was good. There were a lot of key parts they missed that I was mad about. That didn’t stop me from watching it 20-times in a row but that’s off the point. The scritp was good but the shaky camera just annoyed me. The cast was superber. Jennifer Lawrence is hands-down the best Katniss. She is an amazing actress and portrays Katniss’ thoughts perfectly even when they are not said. Josh Hutcherson plays Peeta perfectly. He him self is basically Peeta, they are the same person. Overall it was a great movie, I just wish the had added more of the book in it (which now sounds stupid because it’s based off the book but I still wish they had.) Don’t ruin the book for your self by seeing the movie first or talking to your friends about what happens. Read the book. Then talk to your friends and see the move in that order! I would give the move adaptation an 8 out of 10.

I'd Love To Hear Your Thoughts Too! Cancel reply

Thanks for stopping by!

here’s my top posts and pages!! check them out

click on a word you like and it will bring you to a blog of mine that has to do with what you clicked on!!!

A sampling of my fantabulus followers!